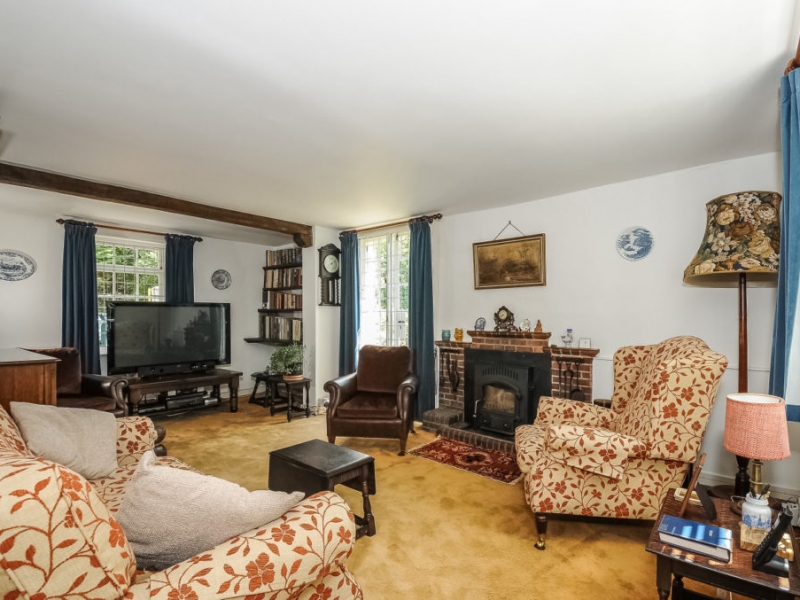 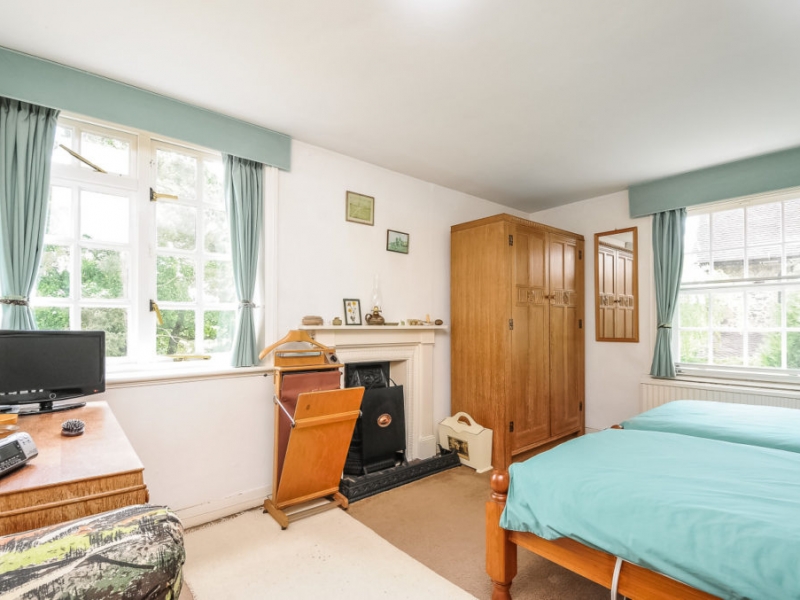 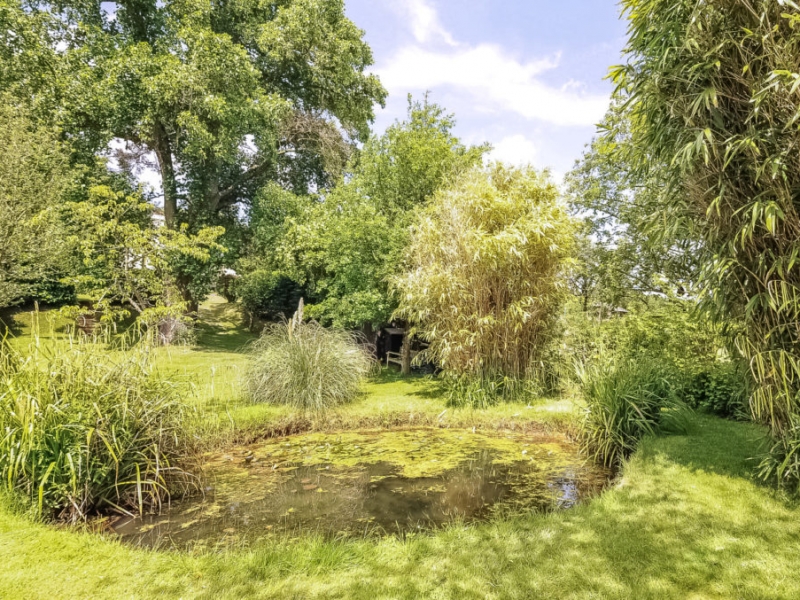 The property sits in an elevated south facing plot, with far reaching views and the garden is an outstanding feature. Lawns wrap around the house with a beautiful magnolia to the front and a gravel pathway leading to the terrace which adjoins the rear of the house. The garden slopes away and halfway down is a magnificent tulip tree. At the end of the garden is a wildlife pond with water lilies and rushes around its edge.

The location is in the heart of the Surrey Hills, surrounded by ‘The Hurtwood’ which is over 3,000 acres of woodland and heathland that is open to the public and ideal for walking, cycling and horse riding. The hamlet forms part of a community that includes Albury and Shere, which are both pretty villages with a church, a pub and a local shop. There is a good choice of gastropubs in the area, as well as cafes, gift shops, a post office and a doctor’s surgery.

The larger village of Cranleigh is six miles to the south and boasts two independent department stores, M&S Food and a selection of restaurants and cafes. The modern Health Centre, Leisure Centre and Arts Centre are situated at the southern end of the high street. There are two supermarkets and a healthy variety of independent shops and established High Street stores.

The market town of Guildford is six miles to the north and provides a mainline train station with a fast service to Waterloo. The A3 also provides quick access by car to the M25 and central London. Guildford provides a diverse range of social and recreational facilities including a theatre, cinema and The Spectrum for ice skating, bowling and most sports. The cobbled High Street and numerous arcades offer a selection of shops, to rival the best of London’s famous streets.

Stone Cottage was built in about 1720 from local Bargate Stone and was originally a forester’s cottage on the Duke of Northumberland’s Albury Estate. It was later gentrified in about 1780 with an elegant Georgian addition and the motifs of the Bray family of Shere Manor Estate appear on the chimney breast.

The property is approached from the lane by a wooden gate, leading to a gravel driveway and a pathway to the ornate, diamond patterned entrance porch. The front door opens into the entrance hall with the stairs directly ahead; the original quarry tiled floor runs through into the adjoining dining room. The kitchen is fitted with a range of shaker style units, a large larder cupboard, electric oven, hob and a sink in front of the window. A door opens to steps leading down to the cellar, which provides plenty of storage space, with natural light from two windows and houses the oil-fired boiler. Back to the dining room – which has original panelling along the stair wall, with a door opening to the under stairs cupboard. On the opposite wall is an open fireplace with a decorative brick surround; there is also a window to the front elevation. A doorway leads to the adjoining sitting room, which benefits from windows on three aspects and a central fireplace with a multi-fuel stove.

Upstairs, there are three double bedrooms and a bathroom. Bedroom one has a double aspect, a cast iron working fireplace and is situated to the rear of the property, enjoying far reaching views over the garden to the fields beyond. Bedroom two is at the front of the property and also benefits from a double aspect and a decorative cast iron fireplace; it also has three built-in cupboards. Bedroom three is also to the front of the property and has a cupboard over the stairs. The bathroom is fitted with a bath and shower above, a washstand and basin, and a WC and bidet; it also houses the linen cupboard and the hot water cylinder.